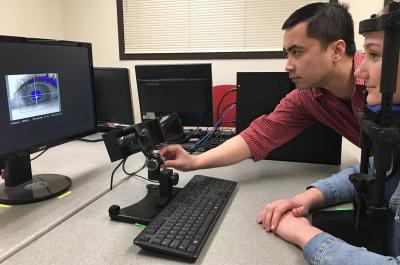 Jason Coronel is an assistant professor in the School of Communication and a researcher who examines how relevant facts can be misremembered unconsciously due to biases people hold. People tend to misremember in order for the information to align with their own beliefs instead.

Coronel’s research has been published in some of the leading journals in communication, psychology and political science including the American Journal of Political Science, the Journal of Communication, Communication Research, and Social Cognitive and Affective Neuroscience.

Interest in how biases influence people’s behaviors and attitudes towards other groups is what drew Coronal to this area of research. He enjoys the challenge of uncovering people’s biases and learning what people are thinking without directly asking.

Coronel received his bachelor’s degree in political science, economics and mathematics at DePaul University. After he obtained a Master of Science degree in philosophy of social sciences at the London School of Economics, he earned a PhD in political science from the University of Illinois Urbana Champaign. Coronel has also received postdoctoral training in communication neuroscience at the University of Pennsylvania.

“There is information and knowledge in people’s heads that they might not be aware they possess, but that influences their behavior,” said Coronel.

Coronel is also interested in the malleability and imperfect quality of people’s memories. Coronel studies how preexisting knowledge and memory reconstruction can lead to stereotypes and biases.

“Most people seem to think memory operates like a video recorder, and if you want to remember something all you have to do is press the play button, but it doesn’t work that way. It is more like a jigsaw puzzle,” he said.

The eye-tracking device used by Coronel and his team shines a low-level infrared light into the eyes of the subject looking at a computer screen to measure the psychological processes happening in the mind. It helps determine if what the person is thinking differs from what the person tells the research team they are thinking. Coronel’s most recent study looked at the voting decisions of Spanish-English bilinguals.

The topic of this study was always something Coronel wanted to work with and explore further because of his own background having to grow up learning English as a second language, while his parents spoke his native language at home. Coronel was born in Manila, Philippines, and moved to Chicago when he was 12 years old. This has influenced him to study the effects of non-English translations of election materials on the voting decisions of Spanish-English bilinguals.

This topic of research is something Coronel can personally relate to. In order to work with such a complex topic, Coronel had to get his research and lab up and running before he could tackle this specific topic.

From his research, Coronel himself now makes a more conscious effort to know and understand facts before making political decisions to avoid misremembering and mixing information.

“This work is important because we’ve been able to show that despite exposing people to accurate information person-to-person, transmission can radically distort information in a way that aligns with people’s biases,” said Coronel.