As a third-year PhD student in the School of Communication, Olivia Bullock spends most of her time on campus researching and teaching undergraduate courses.

Originally from Virginia, Bullock lived in Washington, D.C., for about five years completing her undergraduate coursework and working for corporations and Fortune 500 companies. Bullock has worked for Crosscut Strategies and Focused Image, to name a few.

Bullock received her bachelor’s degree in political science and communication from American University in 2016.

Bullock also worked as a research assistant for the Center for Latin American and Latino Studies. This position focused on understanding media coverage of Latin American politics. Her curiosity about the relationship between culture and politics is what drove her to take this role.

While she was interning for the Center for Latin American and Latino Studies, stereotypes in the media often became relevant in the workplace. Her position involved digging into topics like religion, education and peace. It was working for this organization where Bullock found her passion for research.

Bullock worked for two years at a public relations agency run by a former White House communications official. The agency did political work as well as crisis control for technology companies in Silicon Valley. Bullock learned how to communicate through a crisis and be adaptable.

In this position Bullock wrote press materials, pitched stories to the media and helped clients when problems arose.

Then, she accepted a position to move to another agency that focused more on government work. 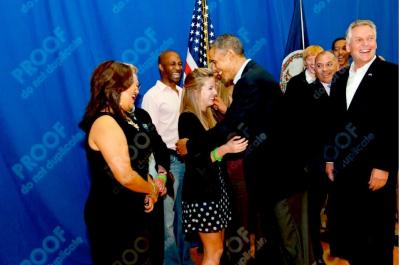 Working for these companies, Bullock made great memories. She said one of the best moments of her career — and her life — was when she met former President Barack Obama in 2013.

“I don’t know if I will ever top it, and it was so early on in my career,” Bullock said.

While working as a dedicated unpaid intern at the time, Bullock was offered the opportunity and didn’t hesitate. On a more professional note, Bullock is very proud of her work and that she was able to get a client on Good Morning America.

Bullock’s client had a “feel good” story that she felt deserved to be recognized, so she pitched the idea to a reporter. This experience made her want to continue working in communications to make a difference.

“There would always be a really satisfying high that you would get when you’re pitching a story to try and get it placed in a news outlet, and then you get one,” said Bullock.

Days after the 2016 Presidential Election, Olivia decided to go to graduate school in hopes of making more of a change.

“I really enjoyed doing that, but I often found myself wondering ‘What is the science behind this?” Bullock said. “There must be a way to design an effective message that is going to have the results we want.”

Drawn to Ohio State for its nationally ranked communication program, Bullock felt a sense of community and purpose from the student body. Ohio State’s sports teams influenced her decision as well. Bullock was also intrigued to learn more about Ohio’s role as a swing state.

Her favorite saying is: “If you’re the smartest person in the room, you’re in the wrong room.” She uses this mantra to remind herself to keep growing and learning.

Bullock has taught many courses on campus. Her favorite is Advertising and Society. She loves hearing feedback from students and incorporating that into her research.